In this post, I will present a workflow that can help “fast” paced, small teams which are managing multiple projects. It’s a variation of the classic git-flow, with alterations to support simultaneous development and QA testing cycles of many features.

I have worked with multiple teams, and with every group, we always had a secondary develop environment separate from production. We used this environment for testing before the production release. Many times release of a tested feature would get blocked by other untested feature. It happened because we would merge multiple feature branches into a develop branch, and for production release, we followed the flow to merge develop into master.

Cherry-picking helped many a time, but it used to get messy. I brainstormed some ideas off my close friend Ankur Bohra, and I will present those ideas here in this article. 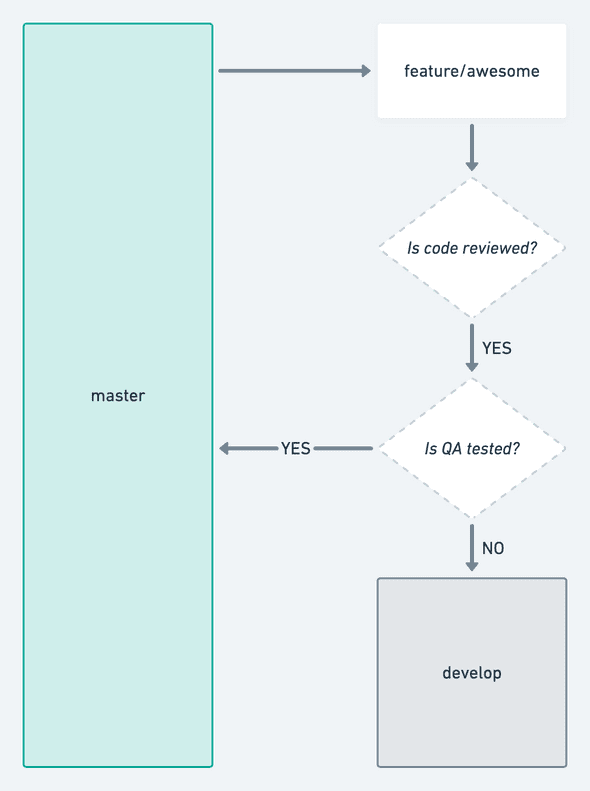 As it should be, the master branch is the production branch.

The develop branch will have the latest development changes that are ready for QA testing, and targeted to be released to production soon after QA testing.

For feature developments, every feature will get a dedicated branch. Create a new feature branch from the master branch.

In addition to this feature class, there are other classes like - hotfix, refactor, bugfix, task. Choose one based on the nature of the change.

The next important step after feature development is code review. One team must not skip this! Create a pull request from a feature branch to develop branch.

Alternate strategy (optional) -
Create a separate feature release branch from the master branch, and raise a pull-request from a feature development branch to its release branch.
Follow a basic naming convention, something like release/feature/{{task-id}}-{{short-task-title}}.
For example, release/feature/12-signup.

A strategy to squash development commits is worth considering before raising pull request or before merging to develop.

The next crucial step before production deployment is to get the feature tested by the QA team.

For the testing release, raise a pull request from feature to develop branch. Get approvals from teammates on this release pull request, and then merge it and deploy.

QA process will identify issues, missed edge case scenarios in the release. Additional code changes will be needed to fix those issues. Commit those changes on the feature branch. Raise a pull request for code review of new changes, followed by QA testing to validate them.

So, how will it help?

So, what do y’all think about this workflow?